I mean, how can you not be? They are so cute together!

We promise, there’ll be no royal wedding FOMO on our watch. This is your guide to everything anyone ever wanted to know about the big event. 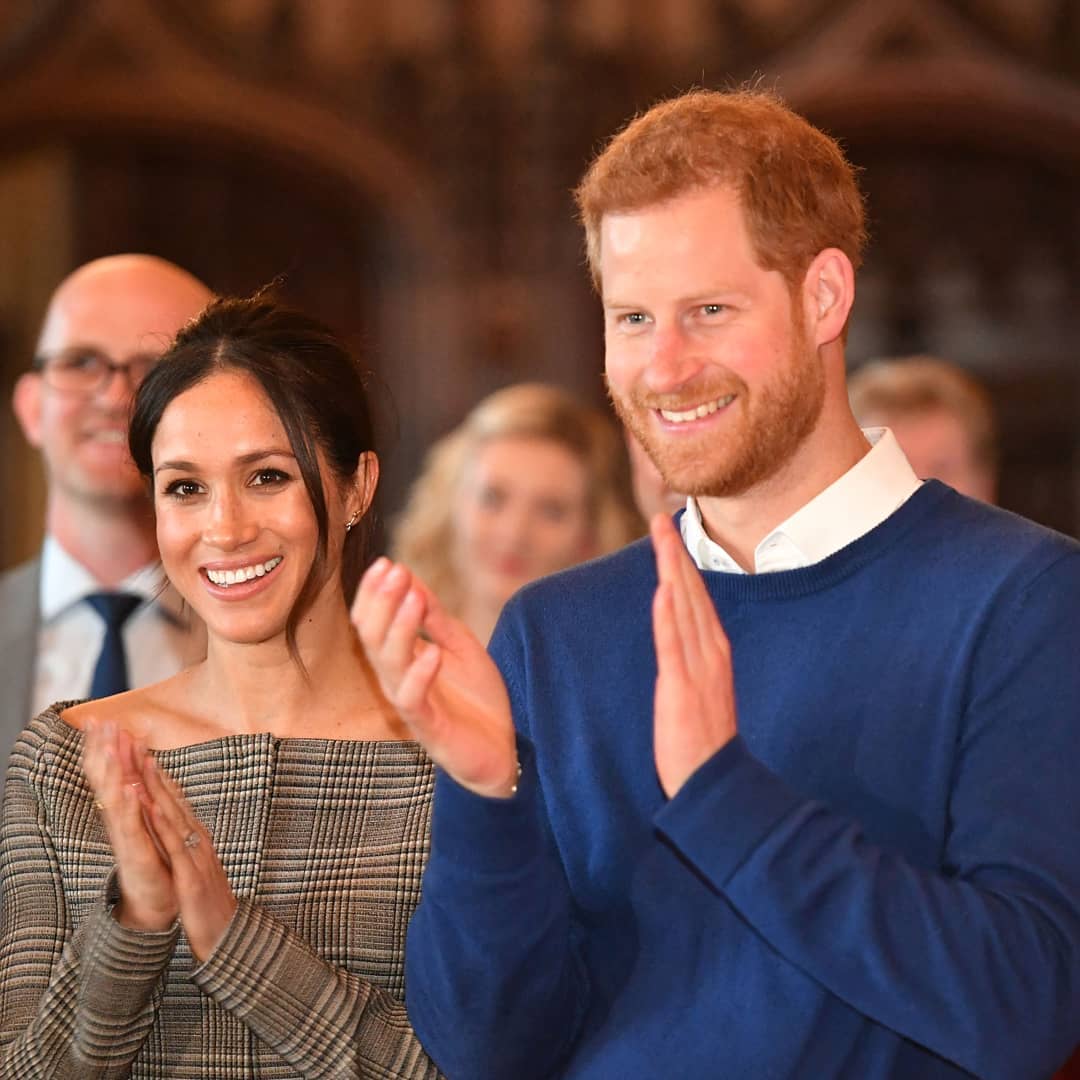 It was widely expected that Markle will turn to a British designer for the all-important gown, but sketches that leaked online suggest otherwise. Despite her convention-flouting penchant for wearing pants to some royal engagements, the dress design is more top-secret than James Bond’s computer password (and that’s hard to beat!).

So here’s what we know:

Markle is said to have already picked out a designer for her wedding dress and her aforementioned BFF Mulroney (a wedding consultant based in Canada) was apparently recently in London to help guide her through the process. Unfortunately, only five close people know who the designer actually is at this point.

While they’re being tight-lipped (imagine what a hard secret it must be to keep!), here’s what we’re guessing:

But, whoever she wears, you can bet on her looking drop dead gorgeous. 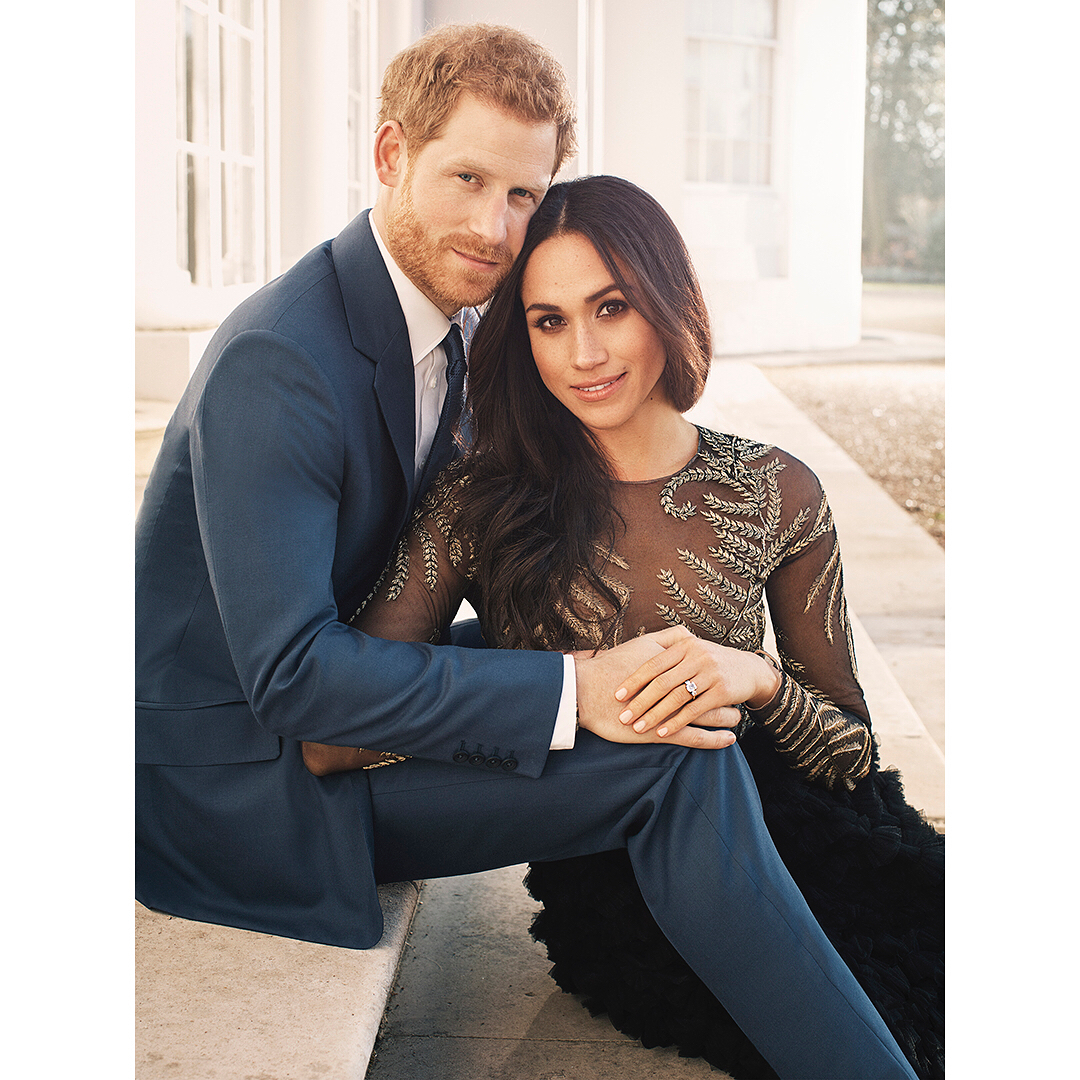 I am fairly certain Harry’s wardrobe of choice will be a uniform. After all, he’s got tons of them.

Did you know that Harry served in the British Army for ten years, doing two tours in Afghanistan and rising to the rank of captain?

The “I do” Date and Time

The ceremony is taking place on May 19, 2018, at 12:00 pm (UK Time). After the ceremony, the happy couple will take a carriage ride through Windsor and then back to the castle. 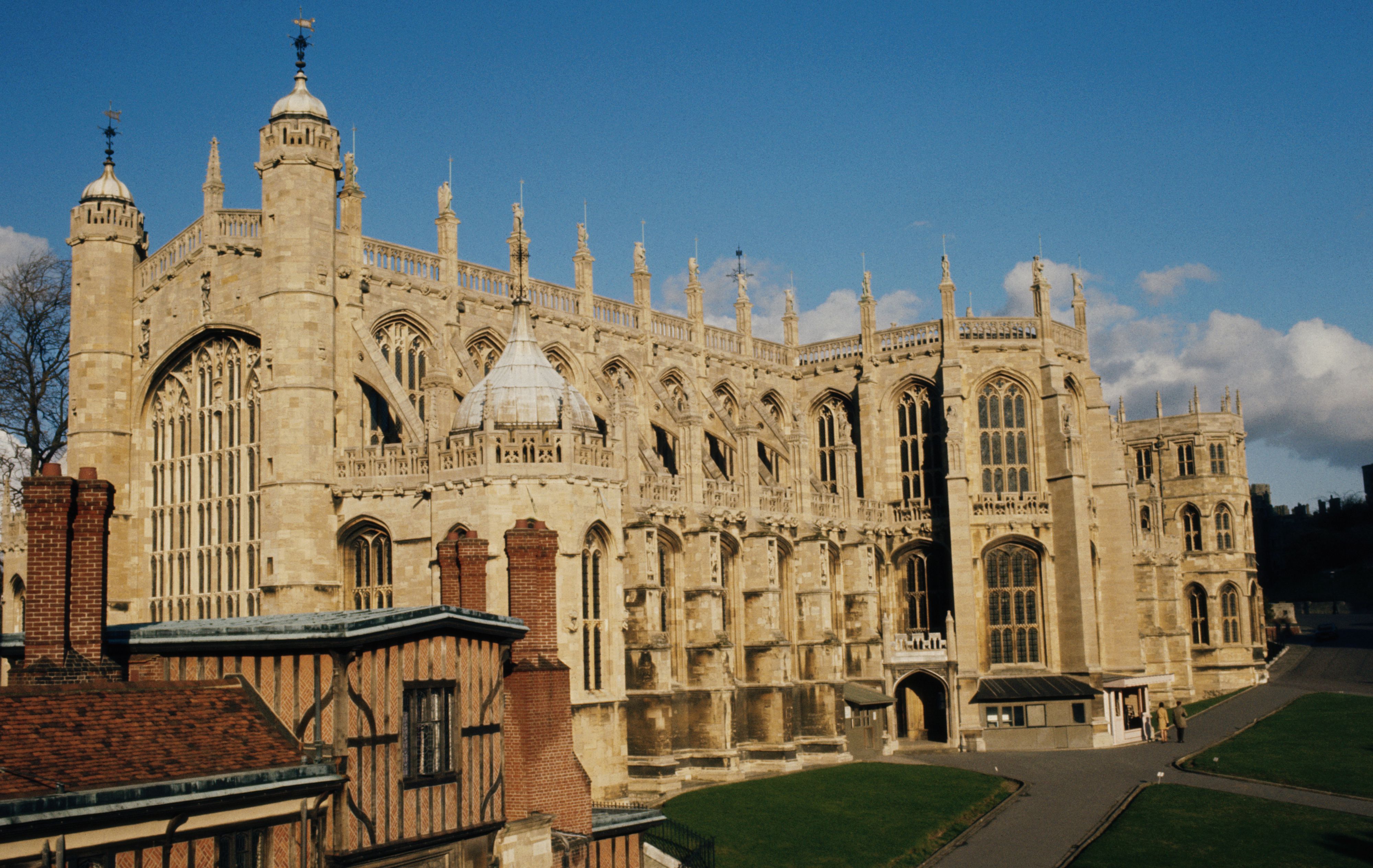 The royal affair will take place at the St. George Chapel in Windsor Castle, this residence is located about 30 km west of London.

In fact, it’s where the Queen spends most of her weekends.

It’s also the largest inhabited castle in the world. And, this 14th-century chapel is where other royals wed, like; Harry’s dad and stepmom, Prince Charles and Camilla Parker Bowles in 2005.

So their choice not only pays ode to the lineage but also to historical and cultural relevance. 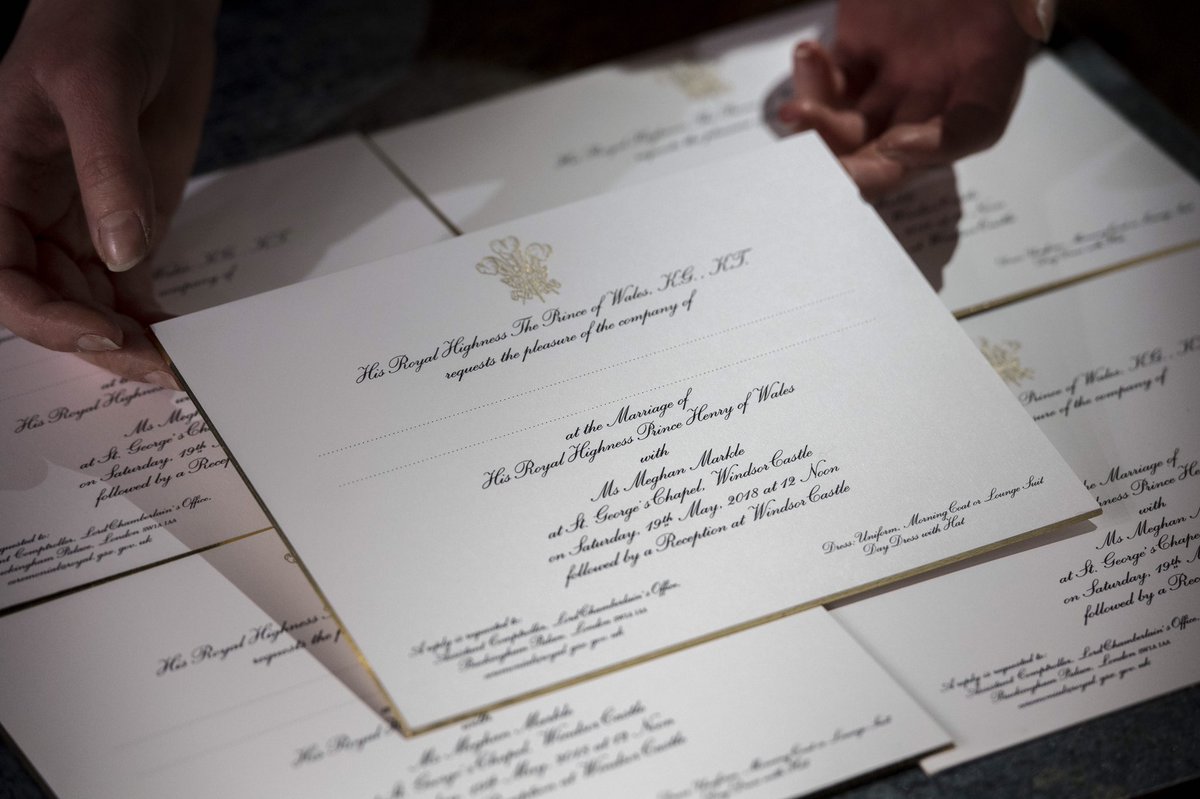 Invites were issued mid-March and was created by Barnard & Westwood company (We’re sure ours was lost in the mail… right?!).

Fit for royalty, the invitations were die-stamped in gold and then burnished.

The text was die-stamped as well, while the edges of the invitation were beveled then gilded. The Three Feather Badge of The Prince of Wales is featured and the guest’s name were later added by a calligraphy printer.

Around 600 people have been invited to the service at the chapel and around 200 guests to the private reception at the Frogmore House. 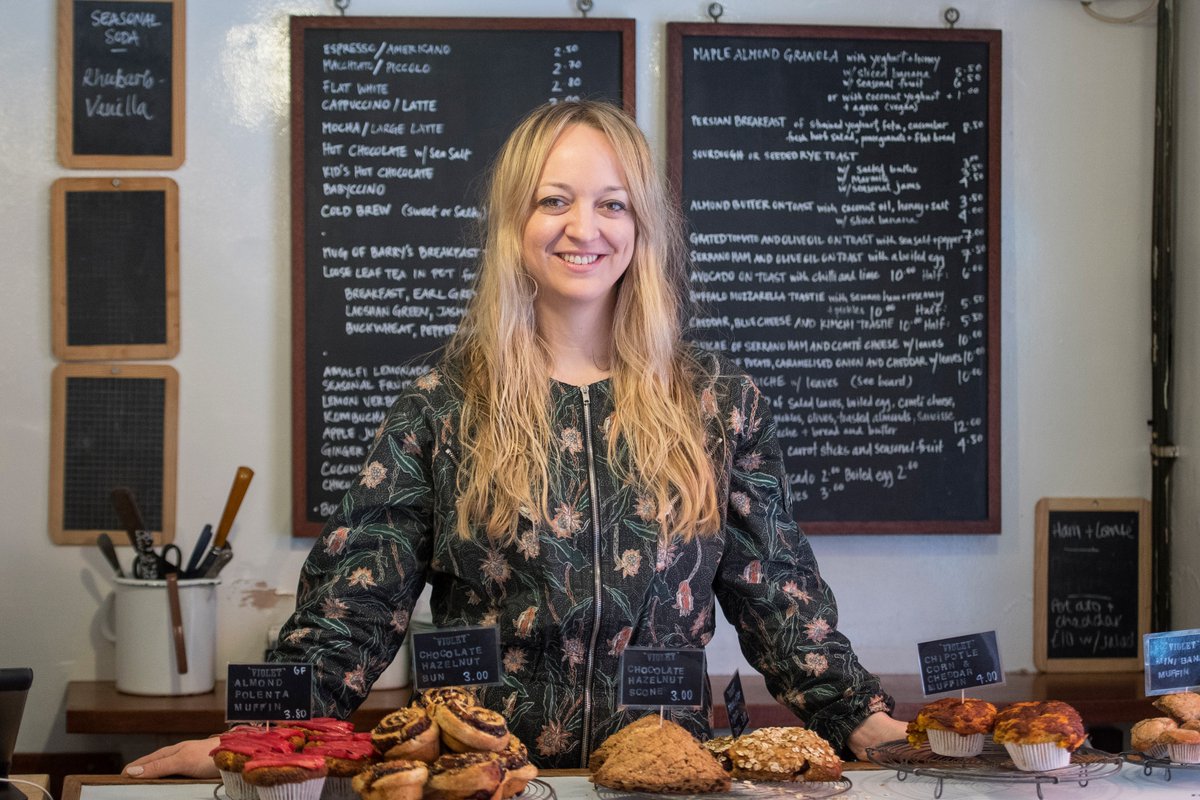 I know you guys have been waiting to know about the cake. (I have too!).

Kensington Palace announced that pastry chef Claire Ptak will be making the wedding cake. Ptak owns Violet Cakes in London, but like Markle, she was raised in California.

The cake is to be made of lemon elder-flower that will incorporate the bright flavours of spring. It will be covered with buttercream and decorated with fresh flowers. *Ah, I can taste it now* 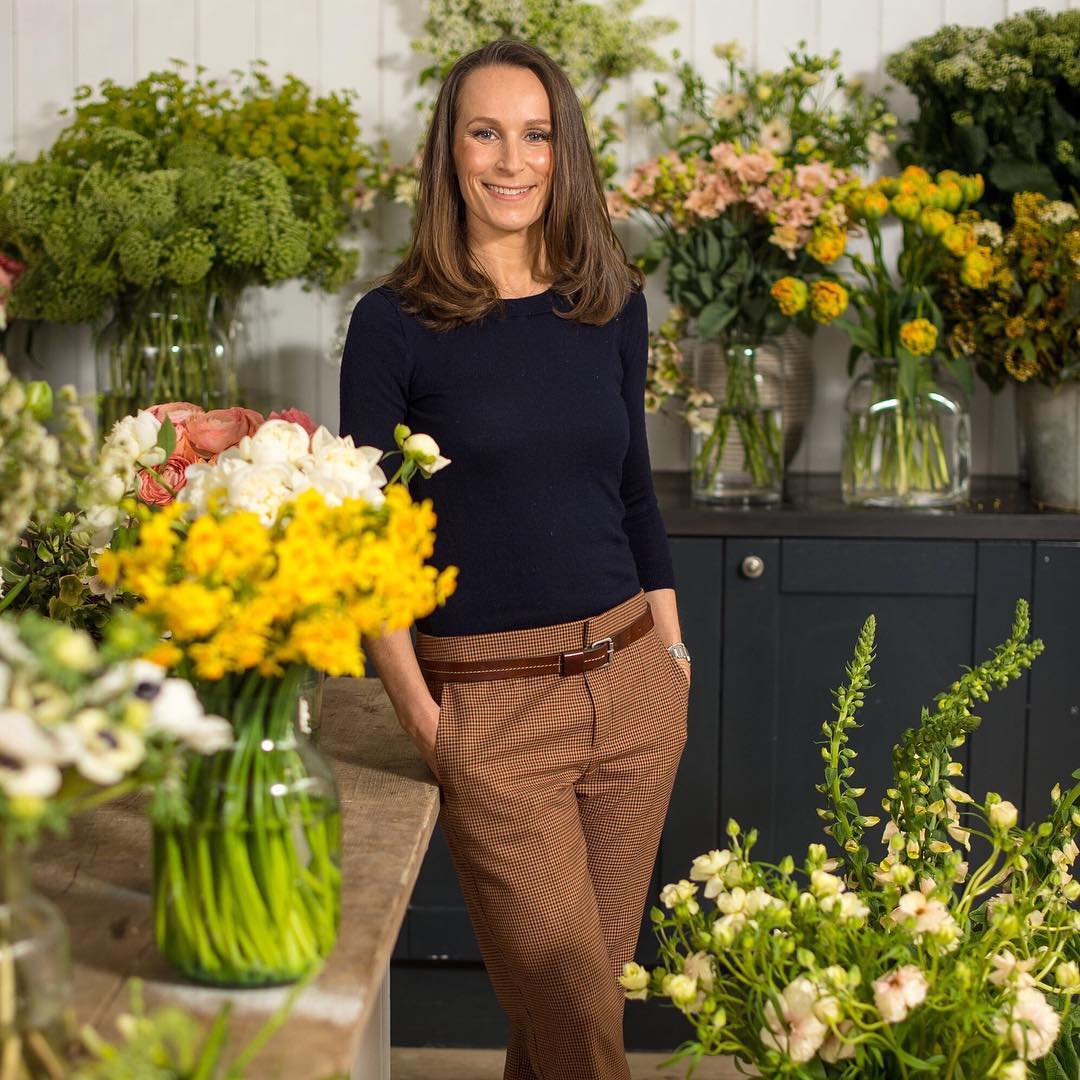 The betrothed couple revealed they have selected florist, Philippa Craddock.

Many flowers will be sourced from The Crown Estate and Windsor Great Park.

And, reportedly they will be using branches of beech, birch, hornbeam along with white garden roses, foxgloves and peonies- Markle’s favourite flowers. 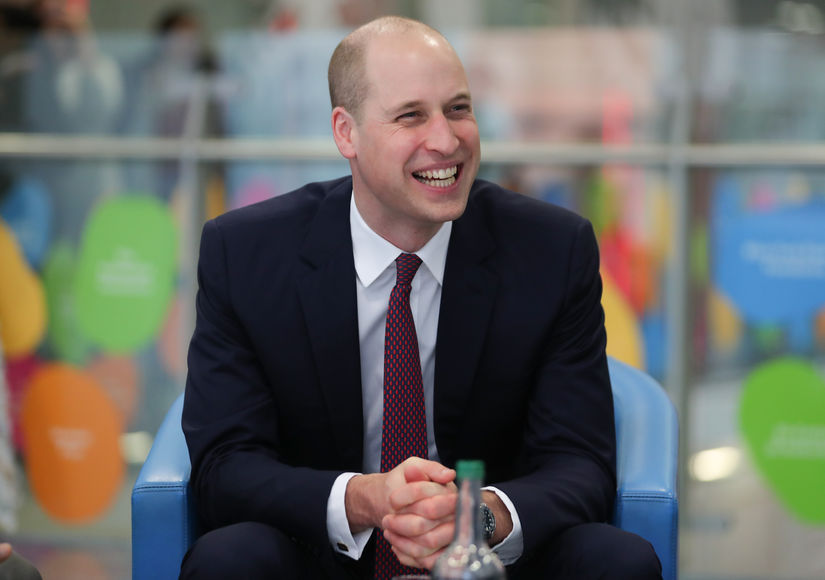 You guessed it, Harry’s best man is no other than Prince William. 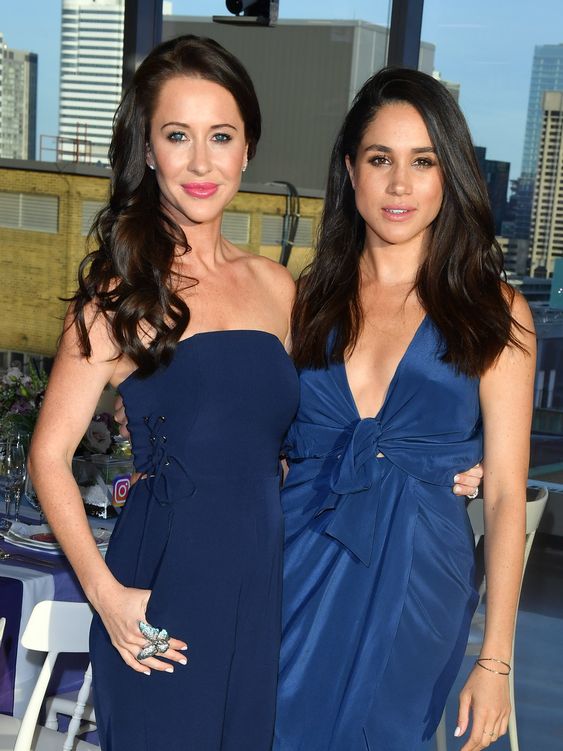 Breaking the royal tradition, Markle will reportedly choose to have a maid of honour rather than a chief bridesmaid. The future royal hasn’t confirmed this or who it will be, but we imagine it’s one of her close friends.

If we had to bet, I’d put money on her best friend, Jessica Mulroney. 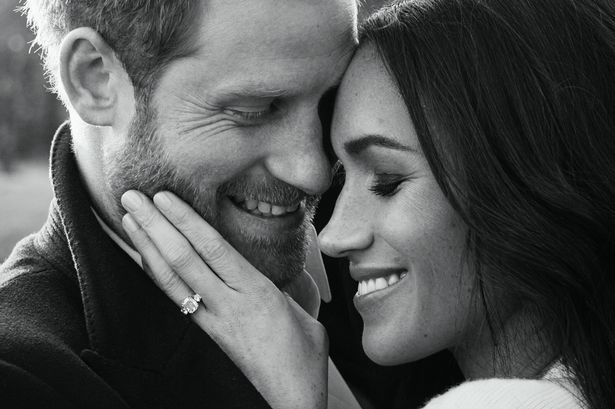 Alexi Lubomirski, who shot the beautiful couple’s engagement photos back in November, will be the official photographer for their wedding.

He will take photos of the newlyweds at Windsor Castle following the ceremony at St Geoge’s Chapel. 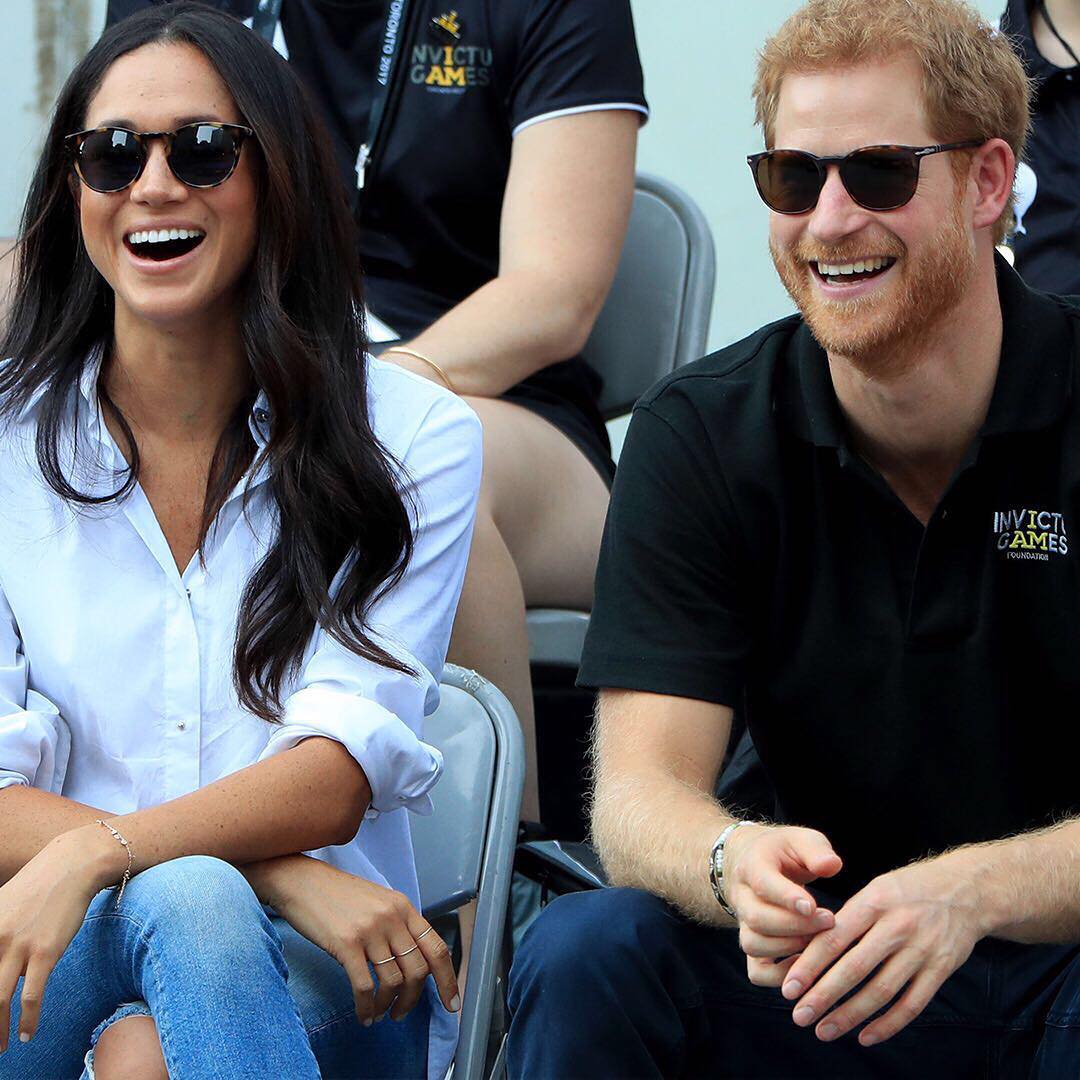 The palace tweeted that “the couple has asked that anyone who might wish to mark the occasion of their wedding consider giving charity.”

There you have it, you’re totally up to speed on every known detail of the Royal Family.

And remember, Duchess Kate Middleton is due sometime at the end of this month, so there will be a cute little guest at the wedding (making the wedding even more star-studded!).

Thank god it’s on a Saturday. But you might need the Monday off to get over/discuss/ rewatch it.

P.S. Pass it on! Planning a wedding can be hard, forward this article to a bride or groom-to-be in need.

Fashion Stylist and Influencer, The Sandy Lion: A Feature