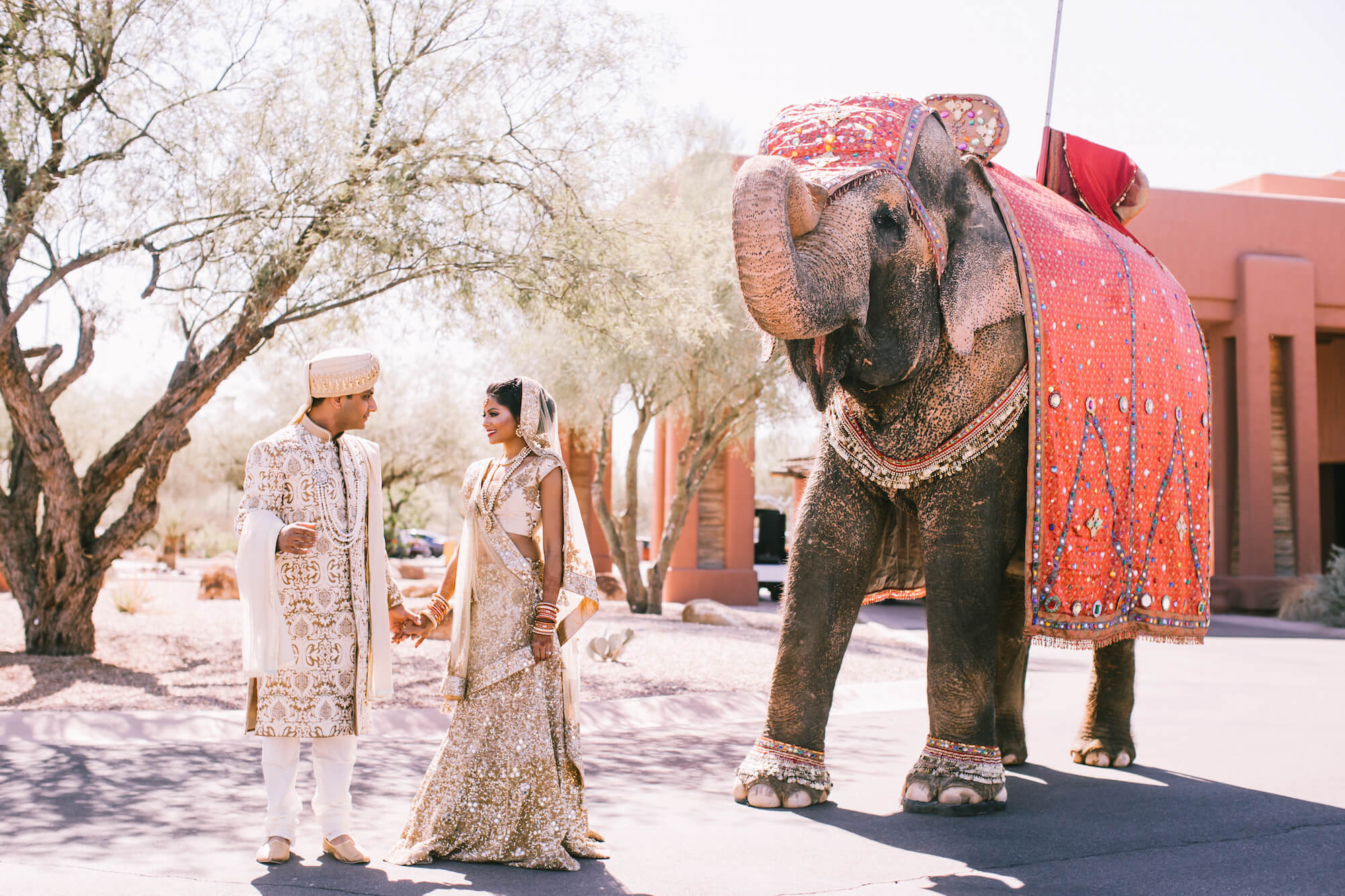 After five years of dating and a move the bride made to Boston for school, the groom proposed to Alka in the most incredible way.

“After I hopped into the shower, Tarang told me he was going to the gym,” the bride said, “when I got changed, he was nowhere to be seen.”

Instead, her brother and sister-in-law played a short video the groom made about her daily stops with surprise family and friends at Starbucks, Bliss nail salon, Rent the Runway, Fig & Olive and the Dream Hotel.

“He really did think of every possible way to make sure the day was planned perfectly, ensuring that I even had a makeup artist the day of,” she recalled. He gave her chocolates and gift cards to treat her every step of the way.

In the end, the groom proposed on a rooftop overlooking the New York City skyline.

The colors of the wedding were soft tones of pink, gold, white and greens sprinkled throughout. Even in her outfits the bride strayed from the traditional reds and whites normally seen with South Indian Gujarati weddings.

The bride included orchids, hydrangeas, and roses and sequined rose-gold tablecloths for certain tables in her decor schematic.

“You really are a princess on your wedding day and you feel so lucky and blessed when your entire family is working so hard to make sure you’re happy,” the bride said about being beautified on the day-of. Bride’s First Look With Her Father

Alka donned a gold and cream colored lehenga with a transparent dupatta accented with sparkles and sequins. The groom matched her in gold.

“It was my entire personality displayed into fashion,” she said about the glamorous lehenga that shone in the bright Arizona sun. Her family knew it was her wedding outfit the moment she tried it on the outfit. 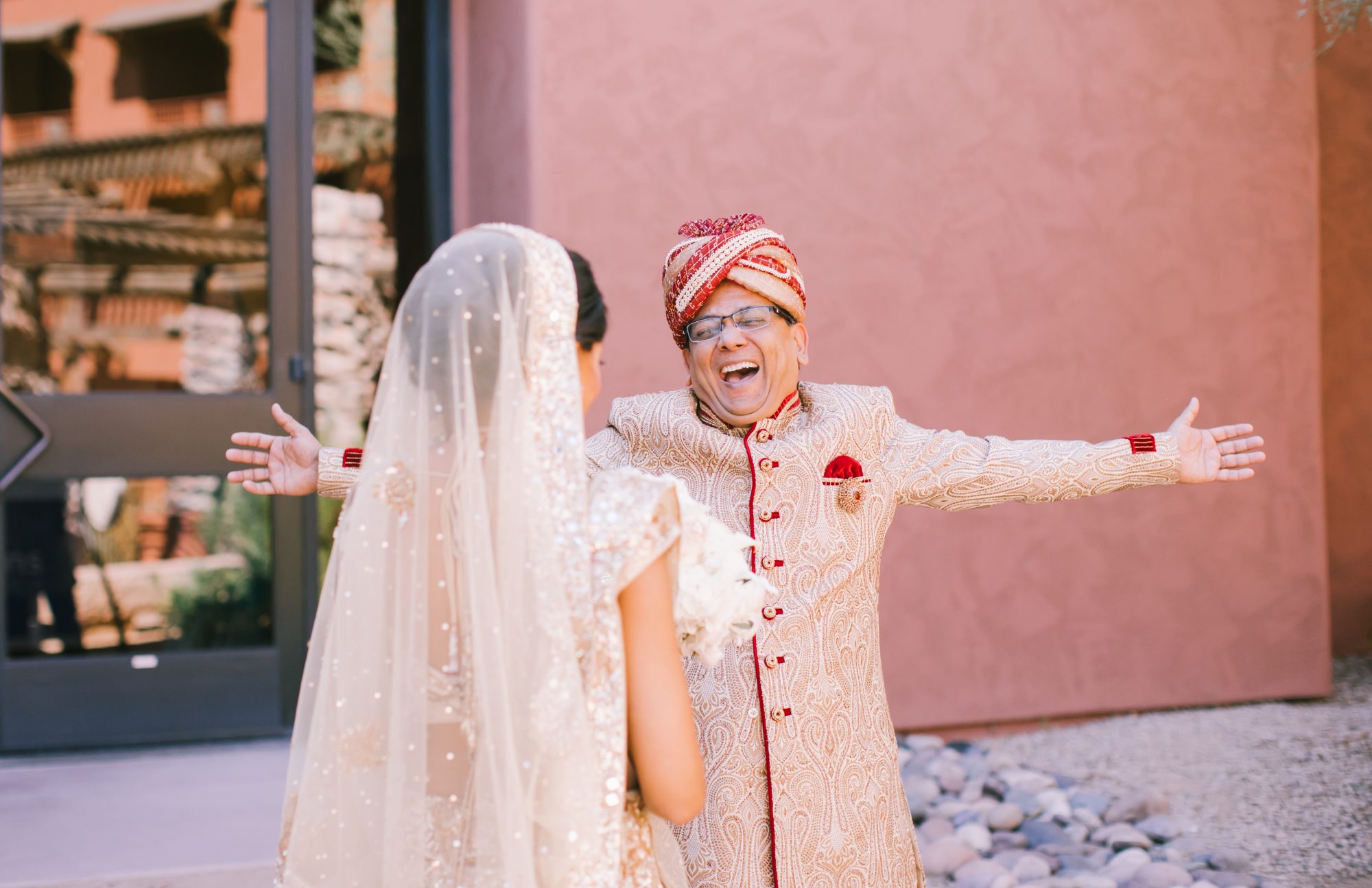 She made sure to also have a “first look” moment with her father, which she loved just as much, if not more, than one with her groom.

“It was just so real and so authentic. My dad is the sweetest and his emotions were riding high, but you could tell that he was so thrilled that I was happy,” she said. 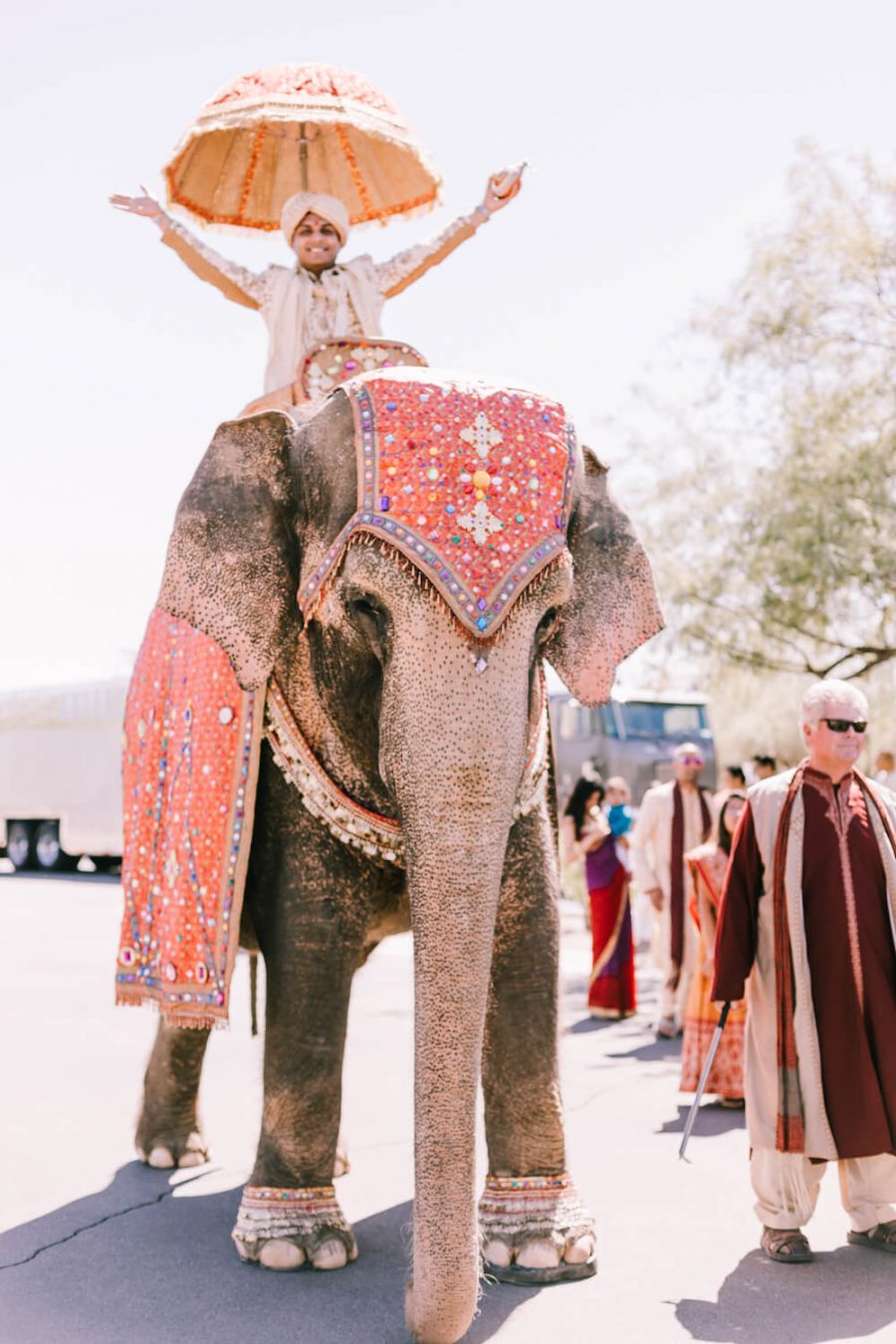 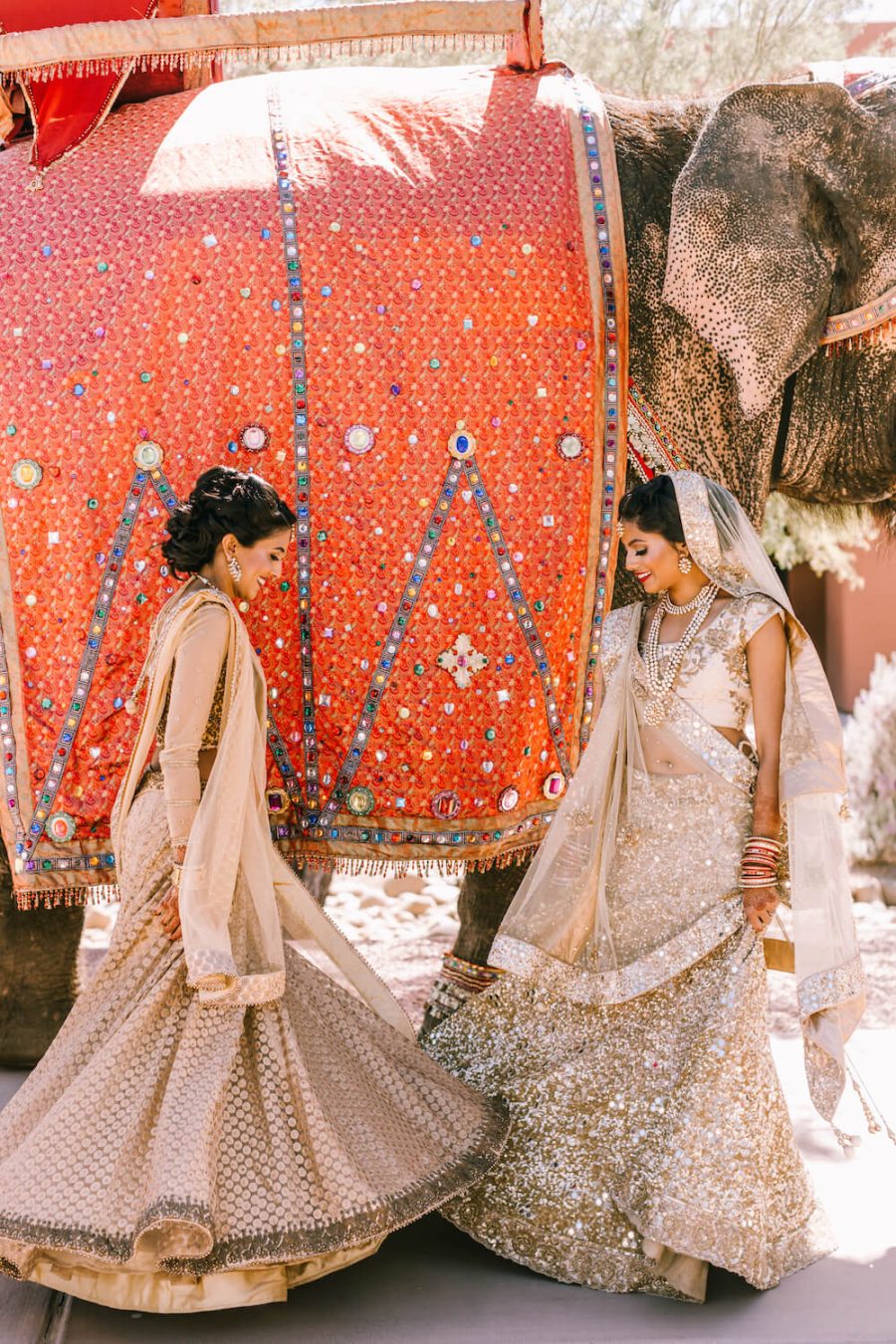 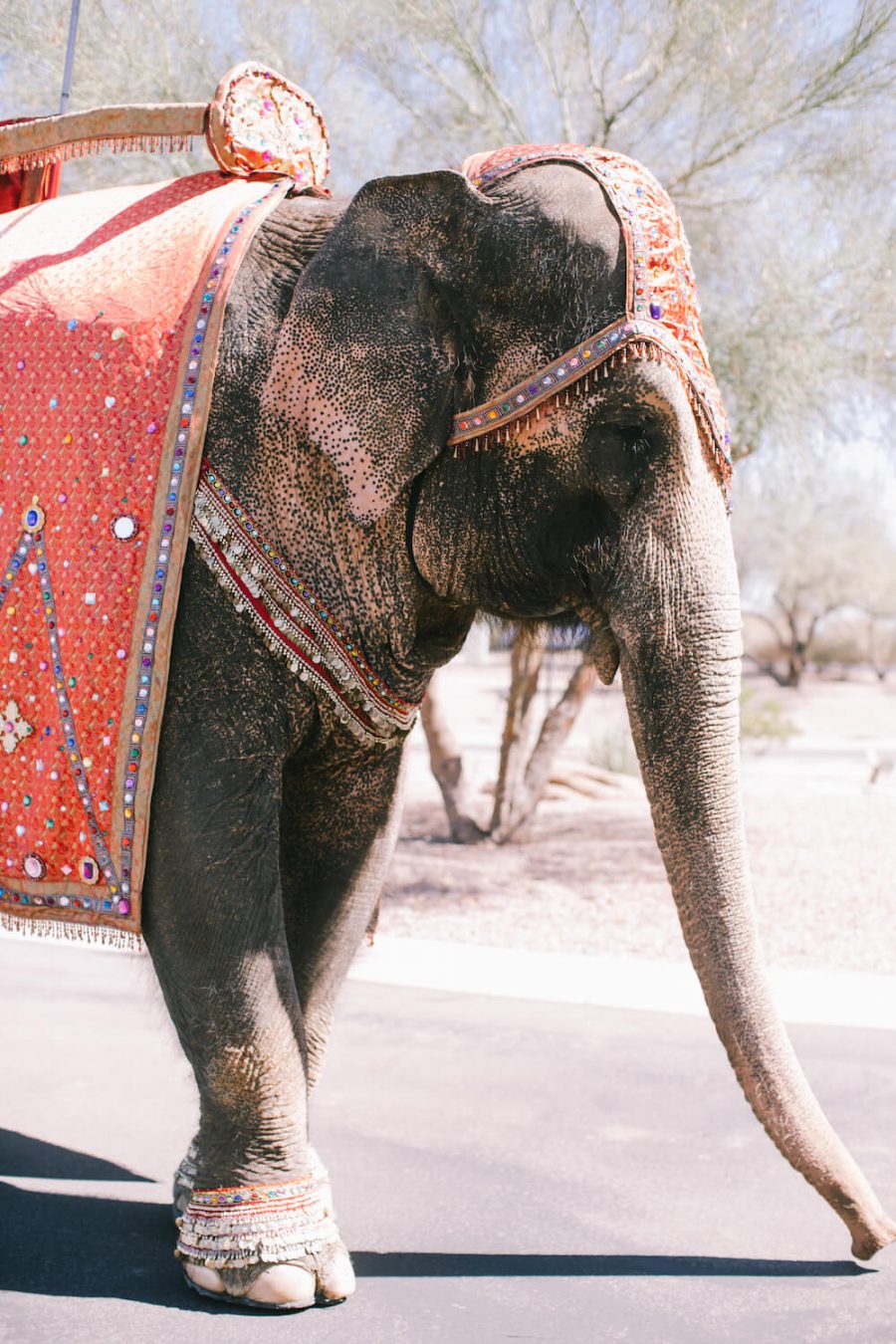 The groom’s parents wanted a larger than life, dream entrance for their son’s Baraat so they enlisted the services of conservation caretakers who brought in the elephant for the big day.

“Tarang was allowed to be a real prince Aladdin that day,” the bride reminisced. 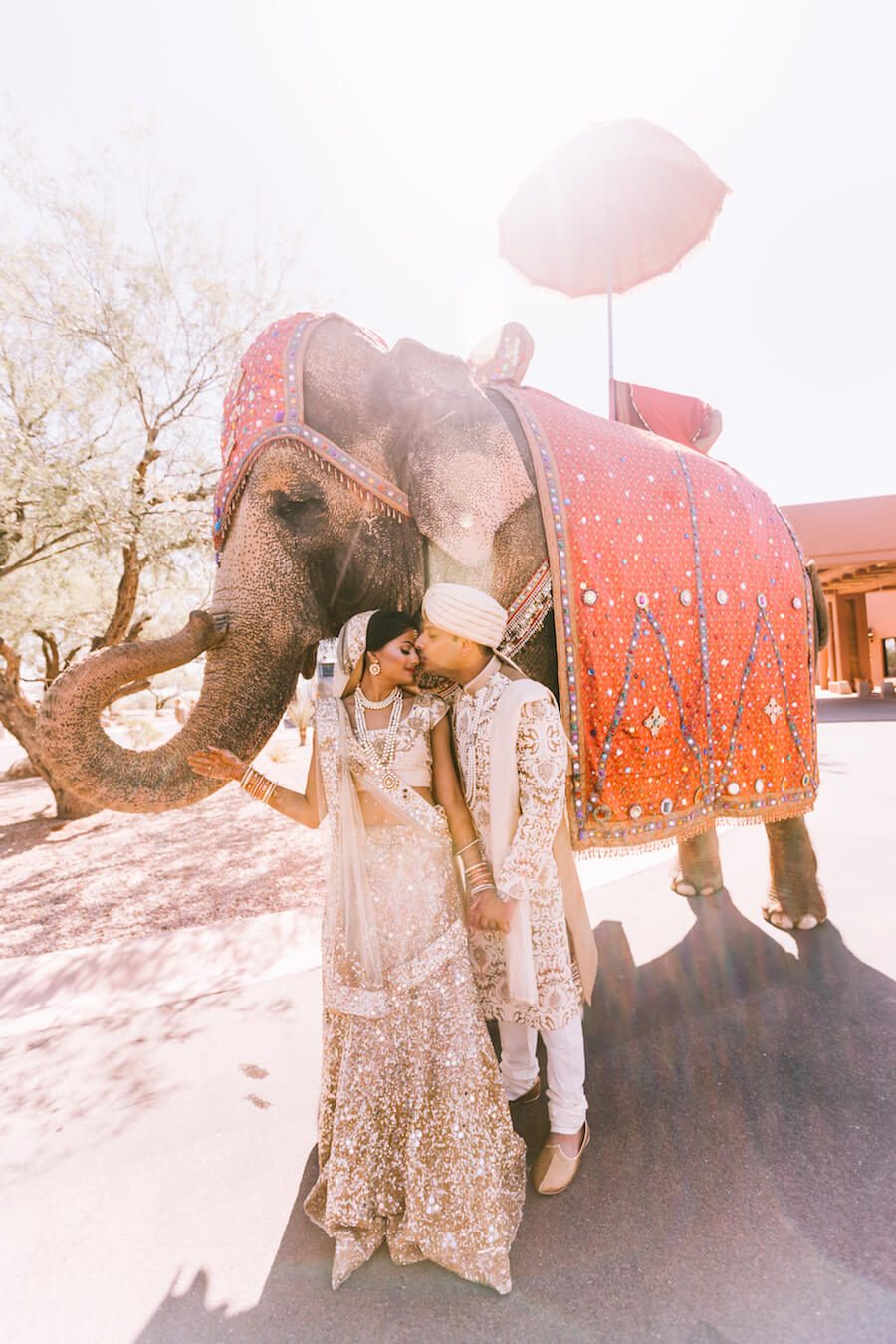 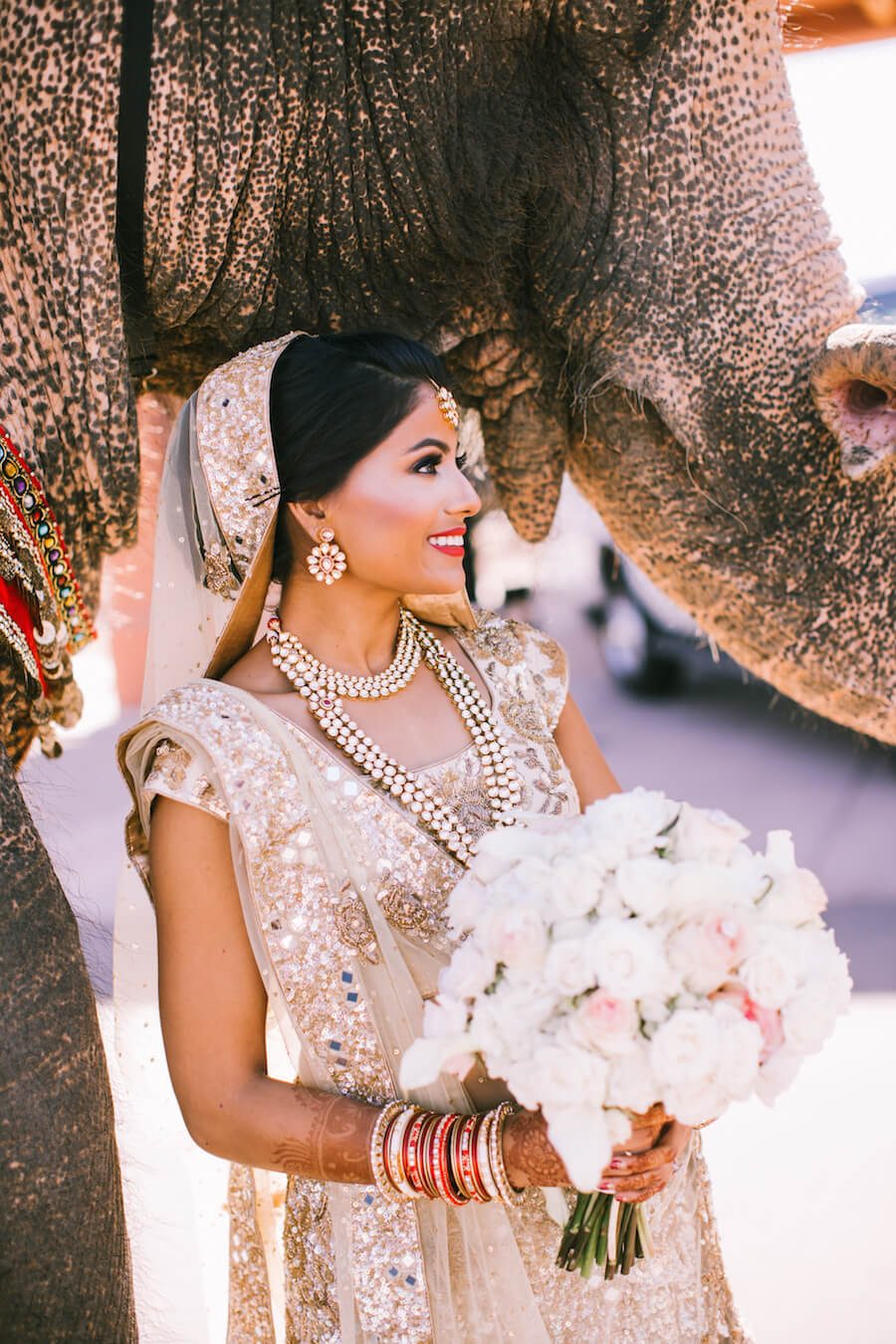 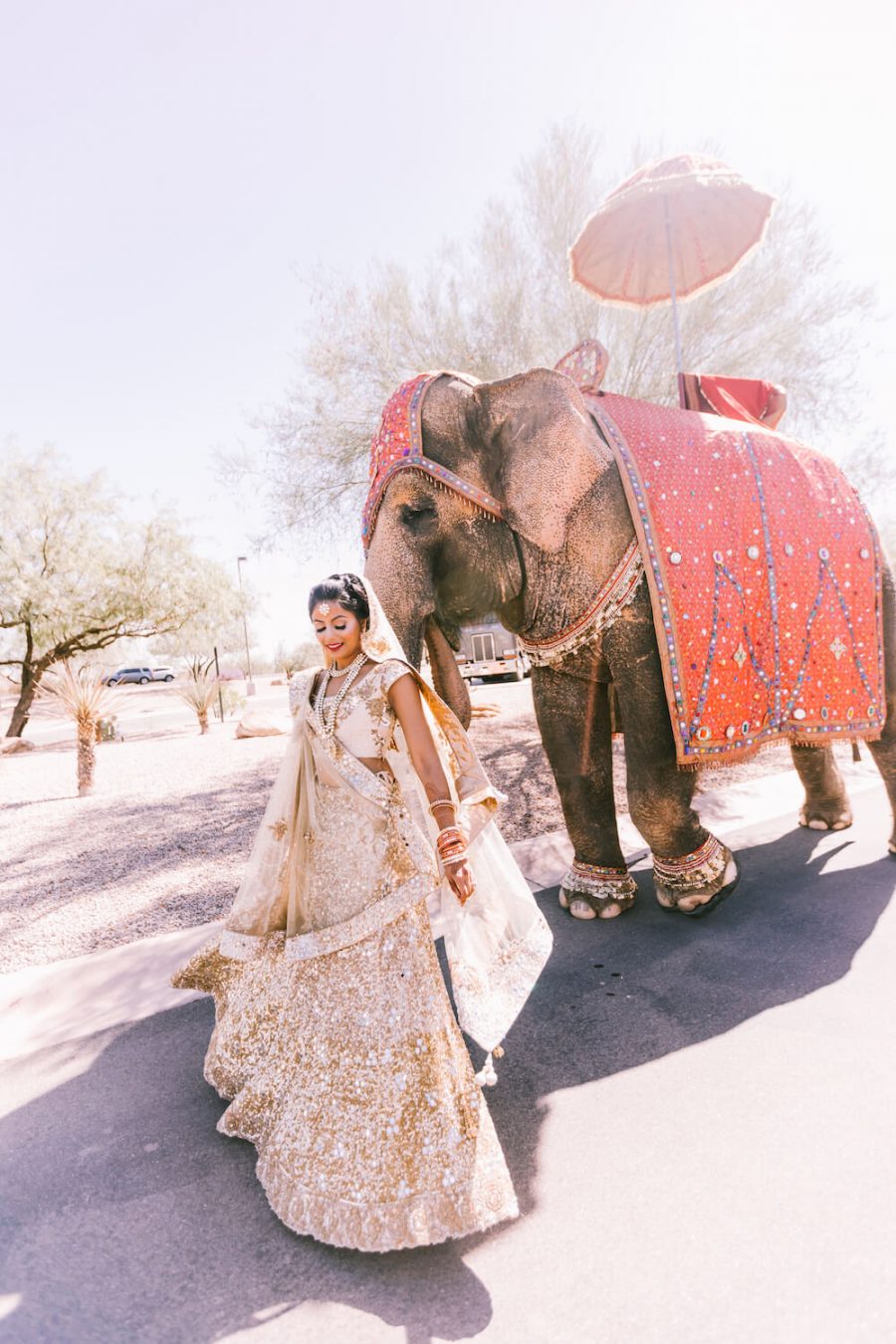 It is not always possible to host elephants at some weddings but luckily the couple’s venue gave them the go-ahead.

“She was so well-behaved and sweet. She would walk alongside us, follow photo cues, and her owners would constantly be aside her to make sure she was comfortable,” the bride beamed about the elephant. 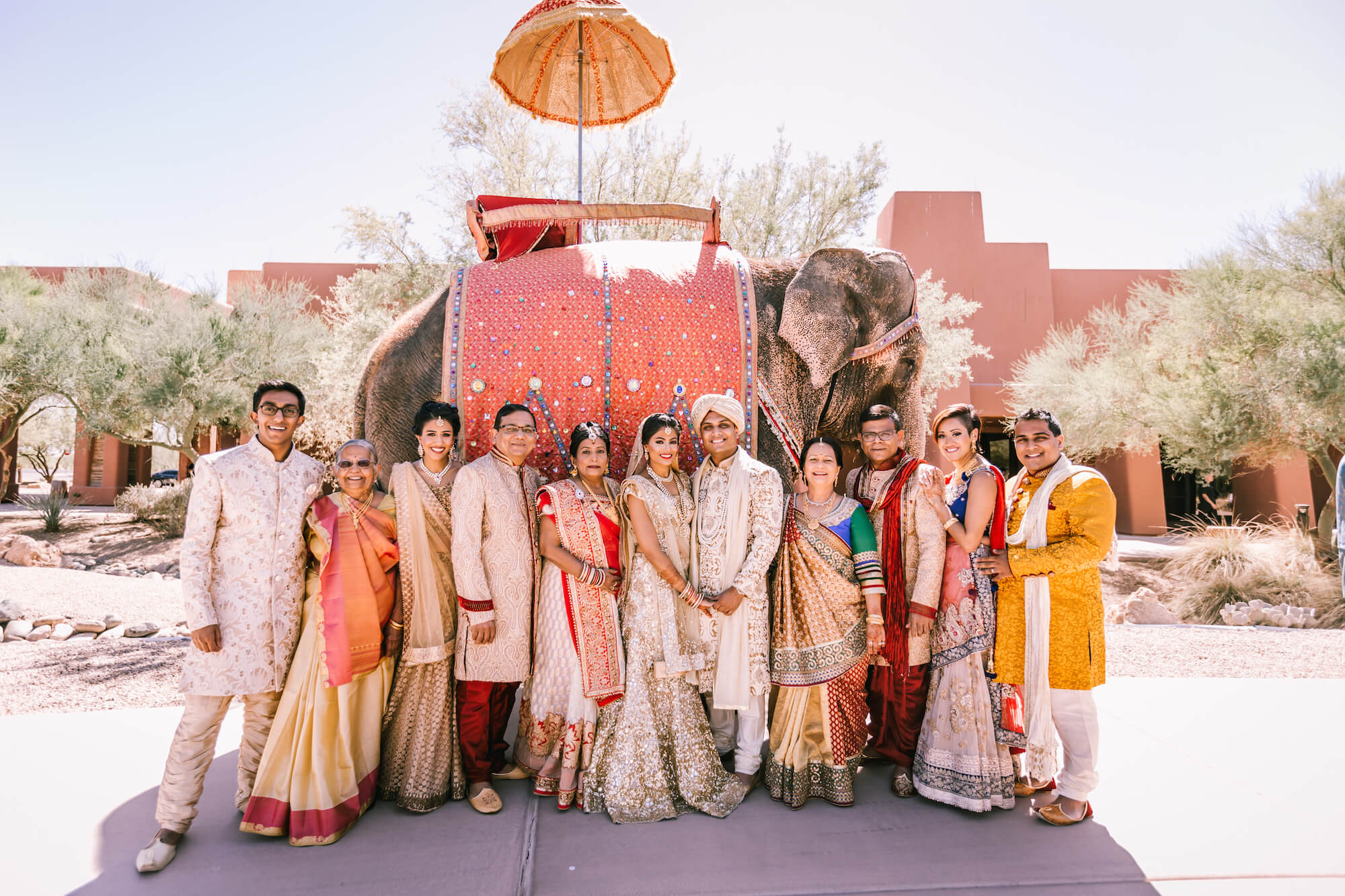 In many of the photos she looks just as happy as the couple!

“I would recommend having an elephant be a part of anyone’s wedding,” she said. “I think it’s one of the only times during the weekend where the groom gets to have his moment, so support his moment.” 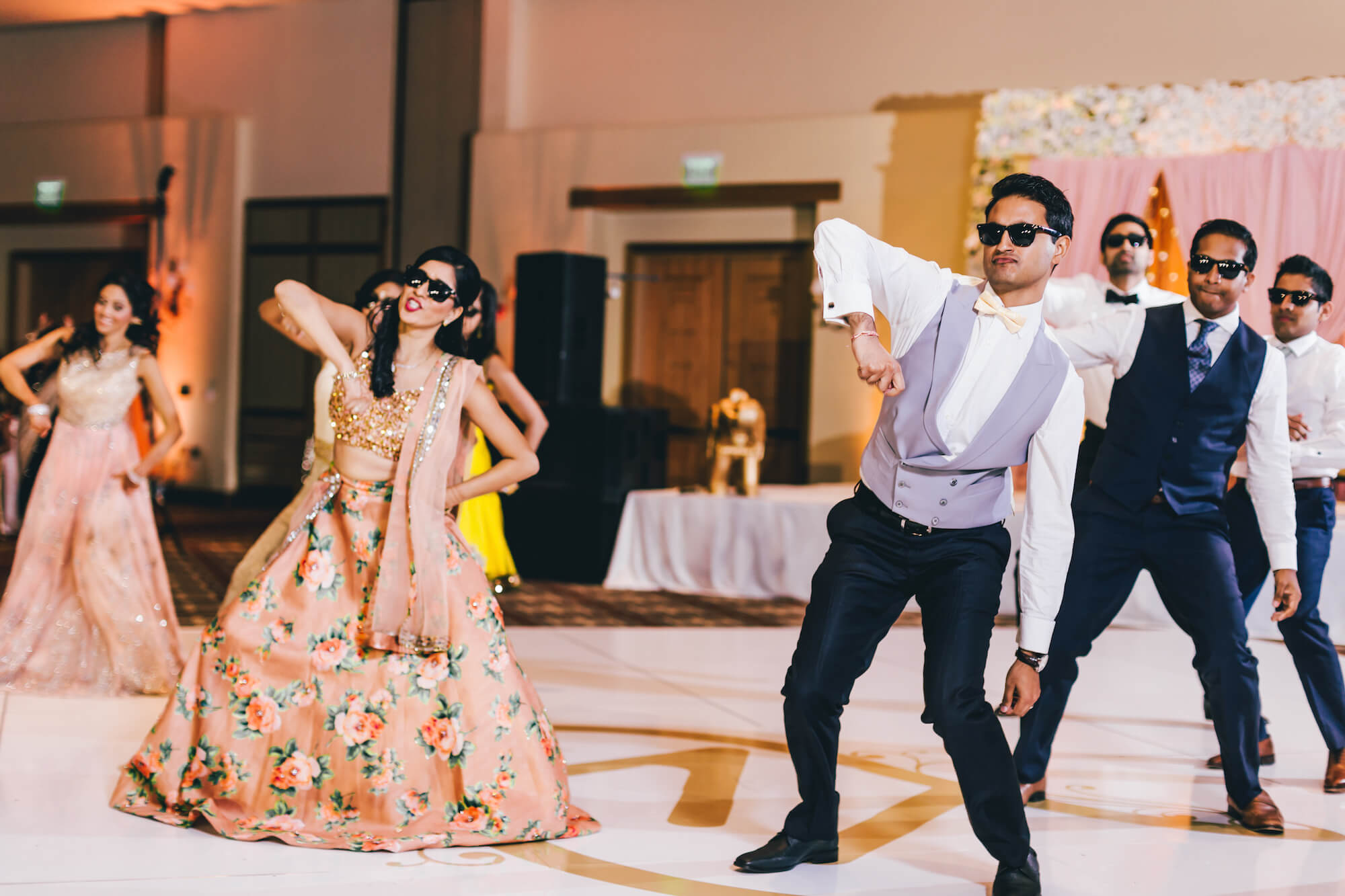 “The reception felt like I could finally party,” the bride said.

It was full of celebration and joy as the bride’s sister and the groom’s brother surprised the couple with group dance. Then friends wowed them with a dance-type-story about their feasible future together. 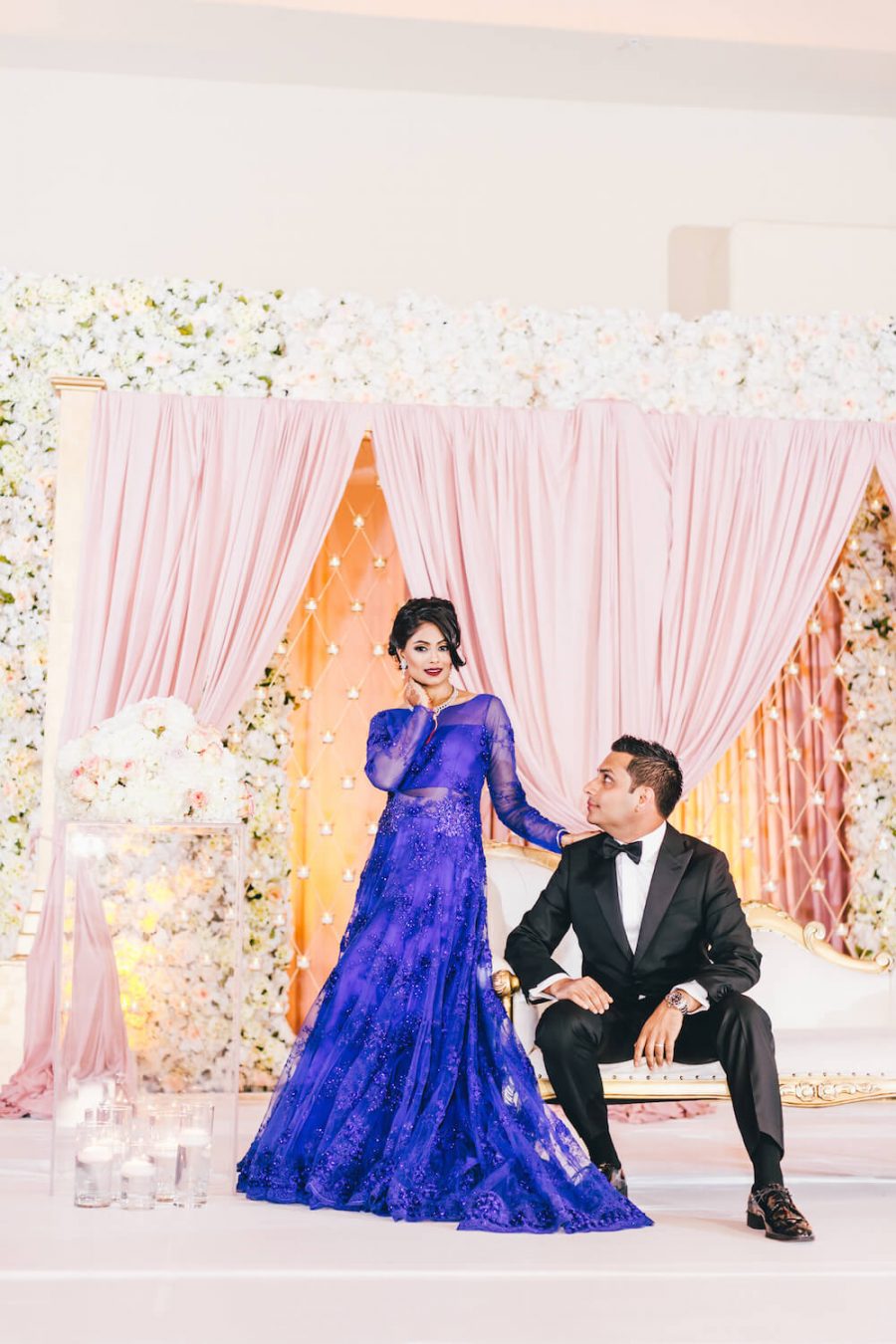 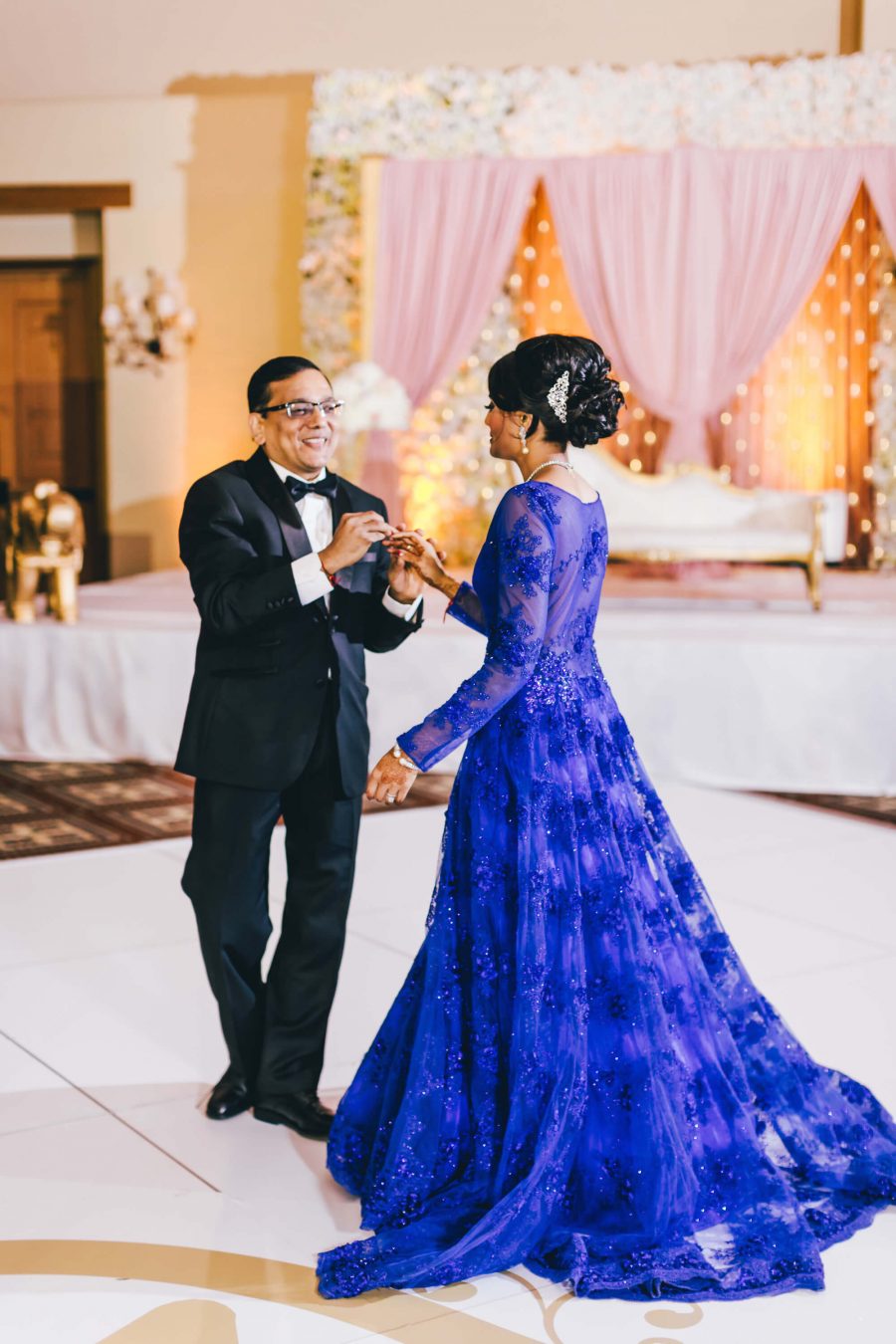 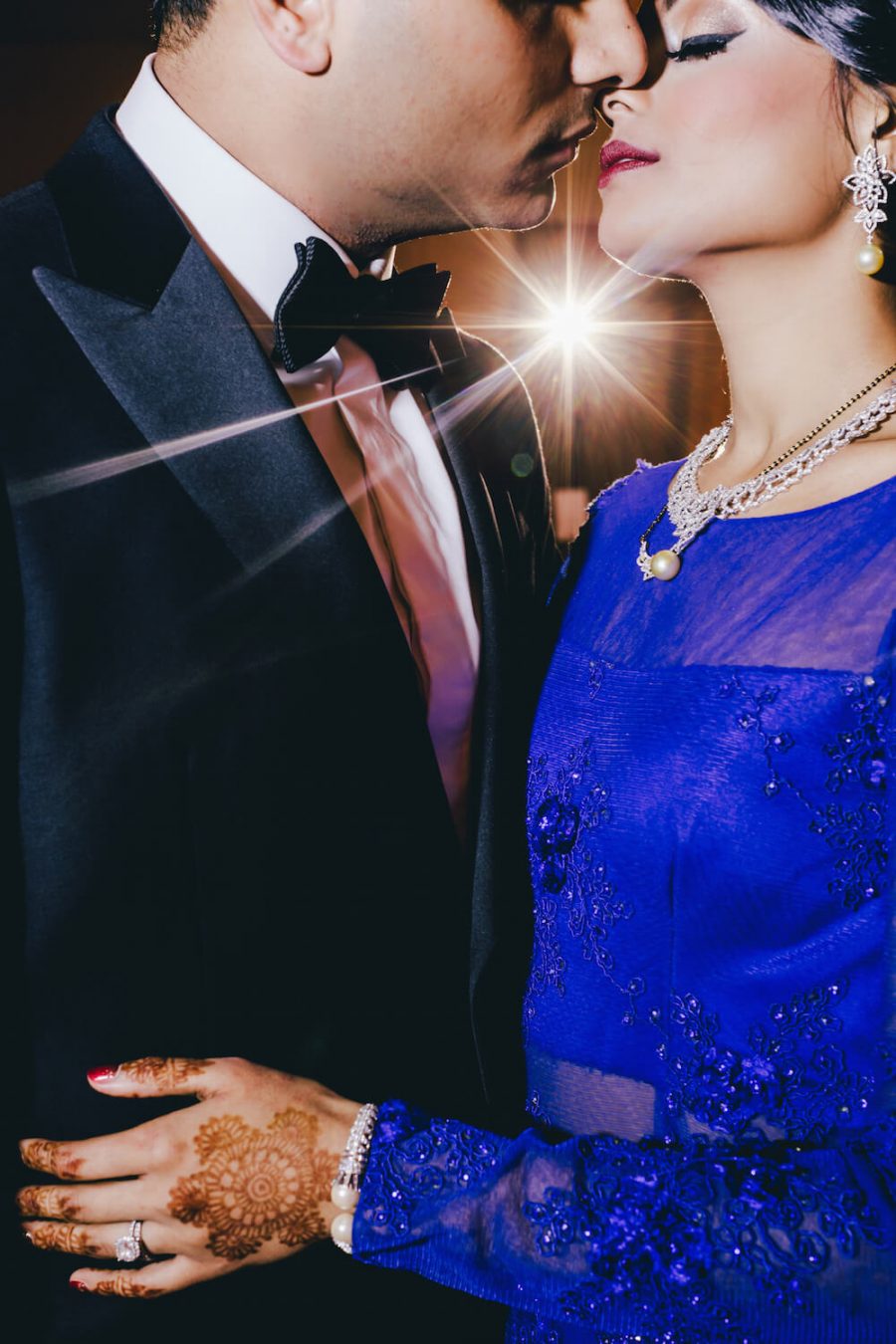 Alka ultimately stunned in a blue evening gown with floral embellishments that positioned itself gracefully as she danced. Tarang complimented her nighttime look with a suit and dapper bowtie.

“It was just such a whirlwind! I think every bride will say that in the chaos of throwing such a big wedding, you feel so many mixed emotions from being totally overwhelmed to excited to nervous all-in-one,” the bride finished.